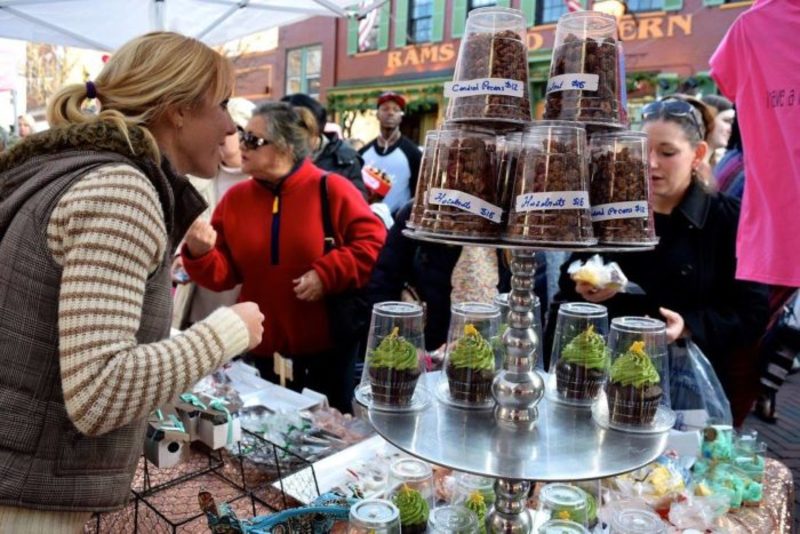 The Annapolis Chocolate Binge Festival is an annual chocolate event held on the first Sunday of December. The event celebrates chocolate with a holiday art market, alongside a variety of fun family activities. At the end of the event, Annapolis Arts District lights its Holiday Canopy. The Annapolis Chocolate Binge Festival is the ideal place to go if you are seeking holiday fun, or you want to indulge in some chocolate. The 2020 version of the Annapolis Chocolate Binge Festival will be held on 6th December. More than forty chocolate vendors will attend the event offering a variety of chocolate assortments including pies, brownies, French macaroons, cupcakes, martinis, cookies, cakes, fudges, caramel, bars, chocolate truffles, and much more. The event will also feature local artisans showcasing various products such as wood turnings, clothing, ornaments, candles, jewelry, pottery, and more. The event will run from 12 pm until 5 pm and will also feature live music.

In Annapolis, everything has a history, this includes chocolate. On Sunday 6th December 2020, Annapolis will be celebrating both the pleasure and history of chocolate at the yearly Chocolate Binge Festival held on West Street. It would be a great idea to visit the Hammond-Harwood House if you would like to learn more about the history of chocolate from the experts.

The history of chocolate dates back to pre-Colombian Mesoamericans( today referred to as Central America and Mexico) who are believed to be the first consumers of the cacao bean that is used to make chocolate. As early as 1400 BC Mesoamericans used to make fermented, cacao bean-based alcoholic beverages. The making of cacao bean-based items quickly spread across the world during the colonial period when European nations were scrambling to expand their empires. Following the advancement of manufacturing techniques brought about by the Industrial Revolution, and the addition of sugar to the chocolate-making process, chocolate became even more loved.

One of the earliest chocolate makers in America and the world Isaac Navarro started his chocolate-making journey in Annapolis. At the time it was extremely rare to find a chocolate maker. He had a street store known as Duke of Gloucester (now occupied by a Capital Accounts retail location). In 1748, Isaac Navarro published a notice in the Maryland Gazette proclaiming that the chocolate sold at his store was as good as any that was ever made in England.

According to food historian Joyce White, the founding fathers of the United States were really fond of chocolate, even though the craft of chocolate making wasn’t widespread at the time. On 27th November 1785, in a letter to John Adams, Thomas Jefferson praised chocolate a great deal and predicted that its nourishment and health benefits would soon make it as preferred as coffee and tea in the United States. George Washington was also known to cacao as well as chocolate processed into bars.
Aztecs and Mesoamericans used to consume chocolate as a frothy beverage. During the Eighteenth Century, chocolate was often taken as a hot beverage crafted from cakes of chocolate. At the time, chocolate cakes were in the form of sweetened solid blocks that were usually spiced with vanilla, orange peel, lemon peel, star anise, cloves, nutmeg, cinnamon, and pepper. The cakes used to be scraped into shavings before mixed with hot water to make a beverage, or to create other kinds of recipes.